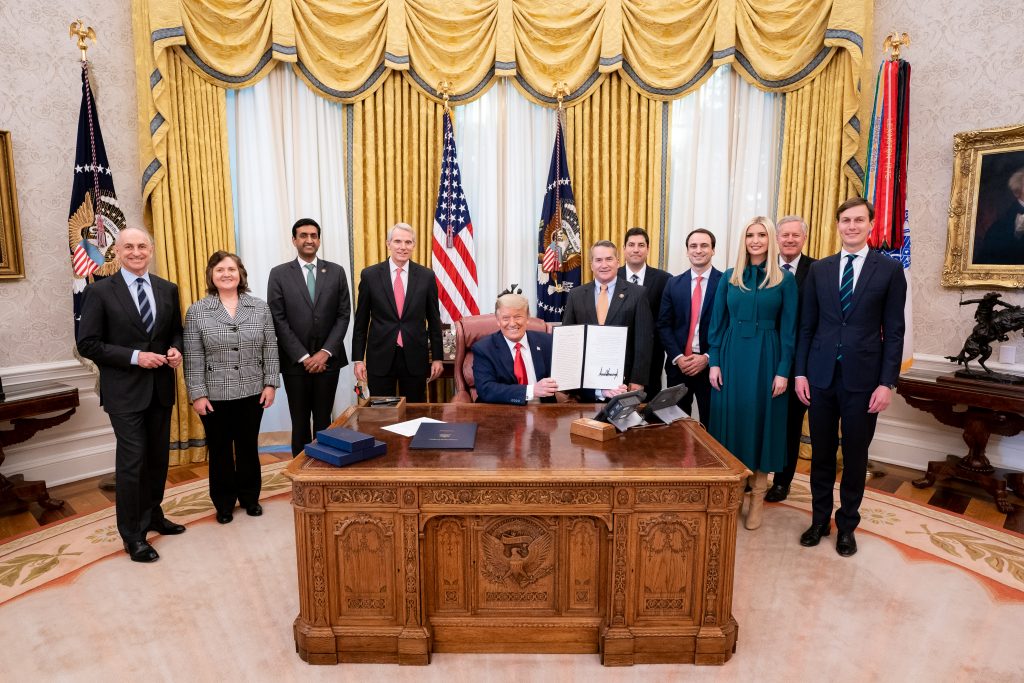 Lynne Parker, second from left, watches as President Trump signs the “Executive Order on Promoting the Use of Trustworthy Artificial Intelligence in the Federal Government”

Artificial intelligence (AI) is playing an increasing role in society, with applications ranging from national security to health care and many points in between.

Now, under an executive order signed by President Donald Trump on December 3, AI is poised to become a new tool to help the federal government run more efficiently and effectively.

The “Executive Order on Promoting the Use of Trustworthy Artificial Intelligence in the Federal Government” lays out guidelines for the development and adoption of AI for use in various government enterprises. It encourages federal agencies to utilize AI technologies to better deliver on their missions, such as reducing outdated or duplicative regulations, combating fraud, and streamlining application processes.

Lynne Parker, a professor in the Min H. Kao Department of Electrical Engineering and Computer Science at UT who is on full-time assignment to the White House Office of Science and Technology Policy (OSTP) and currently serves as Deputy US Chief Technology Officer, helped in the development of this guidance.

“We’ve spent the last year working with federal agencies to develop and refine these directives, so it is gratifying to see that work come to life through this executive order,” said Parker. “More than that, though, it is exciting to be able to help position our nation to continue to be a leader in the development and adoption of trustworthy AI, whose importance only continues to grow.”

The order is based around four core directives to federal agencies:

“AI can be an important tool to help modernize government and ensure federal agencies are effectively and efficiently delivering on their missions on behalf of the American people,” US Chief Technology Officer Michael Kratsios said in a White House press release. “The Trump Administration is committed to advancing AI innovation that benefits all Americans and is underpinned by American values. This executive order will foster public trust in the technology, drive government modernization, and further demonstrate America’s leadership in AI.”

A recognized expert in artificial intelligence, Parker first went to Washington, DC, in 2018 as the Assistant Director for Artificial Intelligence in the OSTP before taking on her current role a little more than a year later. A Knoxville native, she earned her bachelor’s degree at Tennessee Tech University (’83), her master’s from UT (’88), and her doctorate from the Massachusetts Institute of Technology (’94), all of which were in computer science.