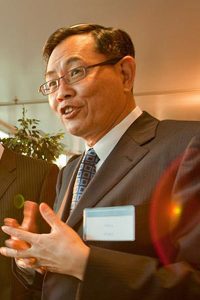 Min H. Kao, born in Chu-Shan, Taiwan, is Executive Chairman of Garmin Ltd., which designs and manufactures navigation and communication equipment. Kao co-founded Garmin in 1989 with the vision of enriching people’s lives by bringing Global Positioning System (GPS) technology to the consumer market.

Under Kao’s leadership, Garmin has become the global leader in satellite navigation with a diverse line of products for outdoor, fitness, automotive, mobile, aviation, and marine markets. Kao received his Bachelor of Science in electrical engineering from National Taiwan University before coming to the University of Tennessee, Knoxville, on a graduate teaching fellowship, where he received his MS and PhD in electrical engineering in 1974 and 1977, respectively.

Kao and his wife, Yu-Fan, have generously supported engineering and science education over the years. In 2005, after discussing with his former mentor and UT electrical engineering professor, James C. Hung, the Kaos elected to donate $12.5 million to construct a new building for the college. The Tennessee legislature’s approval of then-Governor Phil Bredesen’s proposed $25 million in state funding enhanced the building initiative to a total of $37.5 million. Kao also pledged $5 million to match other private donations up to that same amount to establish endowments within the department, a goal which was met and exceeded in 2009.

“I am fortunate to be in a position to give back to a university that gave so much to me,” Kao said. “The University of Tennessee opened its doors and offered me an opportunity to grow in my field. I hope this new facility will allow other young minds to pursue their dreams, and will further position UT as a gateway for great achievements in engineering and innovation.”

The Min H. Kao Electrical Engineering and Computer Science Building is named in his honor and is dedicated to the inventive entrepreneurial spirit that defines Dr. Kao and his career. In 2018, the department was also renamed in his honor.