Aviation is one of the backbones of the modern world, moving people and goods across vast stretches of the planet in a method that far outpaces the speed of other transportation options, but the “carbon footprint” it produces has long been criticized, with an increasing number of calls coming for improved efficiency and reduced emission in aircraft.

A recently concluded, five-year, $2M project led by UT and Boeing and conducted for NASA has produced results that could have major implications on aircraft design and performances for decades to come.

Related: Read about the project’s origins 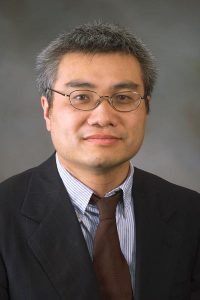 “We were able to develop a high-performing, low-weight inverter that allows for electrified propulsion, something NASA has identified as a goal for the next generation of flight,” said Condra Chair of Excellence in Electrical Engineering Fred Wang. “This allows for greater fuel efficiency, while the switch to electrified propulsion also drastically reduces the amount of pollution produced, which is a real win-win.”

The team’s inverter is the first of its kind capable of operating at a megawatt level using cryogenic cooling a significant technological advance. The team also showed that the technology is scalable to much larger sizes, crucial for widespread adaptation.

At its most basic level, the inverter that Wang and his team developed helps turn energy into physical movement of an aircraft’s motor.

Critically, it does so at a rate of more than 99 percent efficiency, meaning there’s almost a one-to-one ratio of energy used to propulsion produced. Cryogenic cooling—which can be made possible without added weight by using liquified natural gas or liquid hydrogen—makes the inverter a natural fit for working together with future superconducting motors, further helping the efficiency of the system.

With the volatile nature of fuel costs playing an oversized role in which airlines, aircraft, routes are successful, the importance of efficiency takes on an even bigger meaning, making it easy to see why a major manufacturer such as Boeing and an agency like NASA would have interest.

NASA has been developing future aircraft technology to make large reductions in aircraft energy use, emissions, and noise. One concept that builds on the new technology is the N3-X future hybrid-wing body electric airplane, which employs a turboelectric distributed propulsion system. This aircraft is equipped with two wingtip mounted superconducting generators and multiple superconducting motors to run fans mounted on top of the fuselage, all of which is dependent on the new UT/Boeing technology.

“To enable us to develop NASA’s turbo-electric propulsion for large transport aircraft, pure superconducting electric machine development along with a cryogenically cooled inverter is one the most essential technologies, said NASA Program Manager Ben Choi. “In collaboration with Boeing, the UT team has successfully demonstrated a megawatt-level cryogenic inverter, and this great achievement has paved the way for the feasibility of using superconducting machines for NASA’s mission-critical electrical propulsion for large transport aircraft.”

For its part, the NASA portion of the team received one of the agency’s highest achievement awards, highlighting the importance of the team’s combined efforts.

Wang said the project is just the latest example of research UT has done with Boeing to meet those goals, noting that the two have almost 15 years of working together on improving aircraft and their systems, and how that work has impacted global air commerce.

“People around the world are really putting an emphasis on the environment, and companies like Boeing are looking to see how they can make things better,” said Wang. “Aviation is a vital part of our interconnected word, both economically and socially. Making it better for the environment allows that to continue, but in a way that benefits everyone.”