As more solar power is being generated and used than ever before, managing its growth, and the policies governing its use, requires a better understanding of the factors driving that growth.

Now, an interdisciplinary team from UT is researching the residential adoption and use of solar panels at the intersection of socio-economics, politics, science, and engineering.

“This project is designed to investigate the characteristics of American residents who have installed solar panels on their homes and why they did so,” said Research Associate Professor of NSF-CURENT and co-PI Chien-fei Chen. “This could be enormously useful for managing the evolving US power grid and understanding barriers to greater use of renewable resources.”

Using satellite data from DeepSolar—provided by Stanford University—the team identified the number of solar installations per household and total area of installations across service areas of the Tennessee Valley Authority (TVA). An initial analysis by the team showed that low-income assistance programs contribute to residential solar adoption in all areas, especially in cities, and higher electricity prices in general are more closely associated with higher adoption rates, especially in rural and suburban areas. 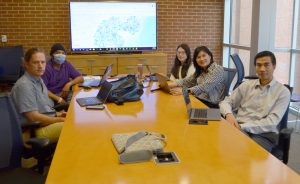 An additional early finding revealed demographic factors such as income, education, and age to be important factors, but incentives programs aimed at homeowners, the physical suitability of climate and home (suitable rooftop) in the area, and the potential financial savings also play a strong role.

“The use of satellite data has been critical for identifying several hot spots of solar adoption that previous studies likely overlooked, said Professor of Industrial and Systems Engineering Xueping Li. “For instance, instead of focusing on counties with high levels of solar adoption, we are identifying the communities within those counties that are hot spots.”

With these initial findings, the team then expanded their analysis to include all counties in the US and performed regionally specific spatial analysis using maps from the platform ArcGIS. They used a machine learning approach called Random Forest to help sift through thousands of possible drivers of solar adoption. 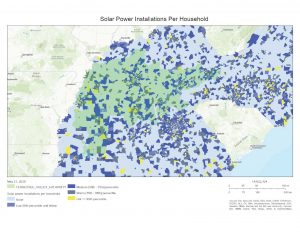 “There are a large number of diverse factors that are correlated with residential solar adoption, and these factors differ by geographic region and community characteristics,” said computer science master’s student Gerald Jones.

“Random Forest allowed us to let the data guide us to the factors that were most important in a particular area. The data set contains over 300 variables and the analysis allowed for a ranking of each variable’s predictive importance which helped in selecting a set of variables to start with.”

After refining the model, they compared the results to a statistical and sociological approach to explain the “whys” of solar adoption.

Last December, the team surveyed 2,300 Tennessee residents serviced by TVA, asking whether they had any previous experiences with rooftop solar and identifying variables related to adoption (financial, environmental, physical, or a lack of considering the option), based on the discrete choice experiment in the survey. Trust in the utility, data privacy concerns, satisfaction with the price of electricity, and interest in other energy-saving programs were also measured.

“Households earning over $150,000 are around three times more likely to purchase rooftop solar as those earning between $50,000 to $75,000 after controlling for age, gender, and home ownership status,” said Associate Professor of Economics Scott Holladay. “These results illustrate distributional issues around rooftop solar where high-income households are more likely to take advantage of the benefits of rooftop solar.”

The team also used the location of the respondents to estimate which parts of the grid are most likely to see increases in rooftop solar. One finding showed residents in Tupelo, Mississippi, for example, are around four percent more likely to purchase a system than those in Bowling Green, Kentucky, while holding system characteristics constant.

“It was interesting because few studies have looked at how the utility-customer relationship that was built elsewhere outside the solar projects could impact residents’ intention to adopt rooftop solar,” said post-doctoral researcher with CURENT, Xiaojing Xu.

Finally, participants were asked to choose from different combinations of financial savings and carbon-emission reductions. This information will be used to develop a decision-making curve from which the researchers could estimate the public’s overall probability of adopting rooftop solar systems in given conditions.

“Our ultimate goal is to determine how to efficiently and equitably integrate residential solar generation onto the electric grid,” said Charles Sims, the project’s PI. “Achieving these goals requires a clear understanding of what drives customers to adopt solar, and this project has moved us closer to this goal. The next step is to determine how utilities should respond to and adapt to the spread of this new emerging technology.”