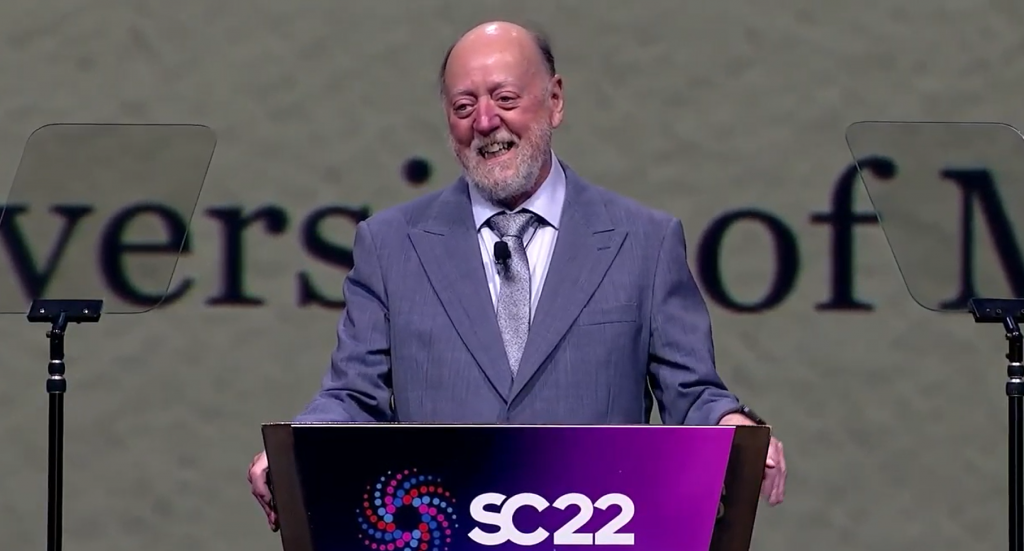 Jack Dongarra took the stage at the SC22 supercomputing conference to the kind of fanfare usually experienced by stars of stage and screen. HPC Wire’s report on the event described the scene as “more rock concert than supercomputing conference” as attendees cheered and waved signs as he stepped up to deliver the annual ACM Turing Award Lecture. Dongarra was surprised but appreciative of their enthusiasm.

“I wasn’t expecting this. Wow,” Dongarra told the crowd. “I have to say it’s a tremendous honor to be the most recent recipient of the ACM A.M. Turing Award. An award like this couldn’t have come about without the help and support of many people over time.”

Fresh off receiving the 2021 Turing Award, considered the Nobel Prize of computing, Dongarra definitely earned his celebrity status in the supercomputing world. He is an emeritus Distinguished Professor of Computer Science and recently retired from his role as founding director of UT’s Innovative Computing Laboratory.

The landmark of his storied career was in developing software packages that became the industry standard, allowing high-performance computers to become increasingly more powerful in recent decades—the LINPACK and others. The latest edition of the Top500 list of the world’s fastest supercomputers, which he helped create, was announced at the conference.

At SC22, Dongarra delivered the talk “A Not So Simple Matter of Software.” He covered decades of advances and what is generally a game of high-speed “catch-up” in maintaining software that address the demands of exascale computing. He also offered insight into his personal background and the inspirations that led him to take on his life’s work.

Read the full report on the event from HPC Wire.