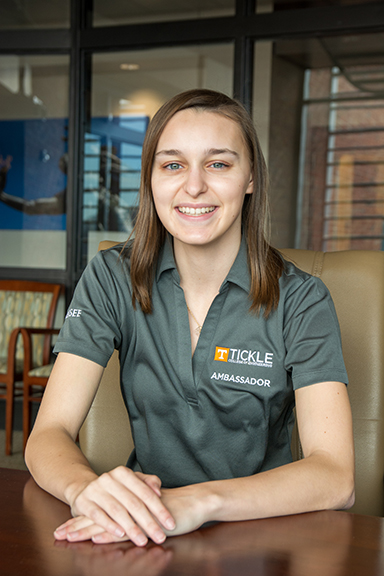 Tickle College of Engineering senior Kelli Determan has been selected as the winner of the 2022 Knoxville Association of Women Executives (KAWE) Marcia Katz Scholarship, awarded annually to women engineering students with the potential to be future executives.

Determan, a native of Belleville, Illinois, is currently pursuing a degree in electrical engineering with an honors concentration and a minor in leadership.

“I am so grateful to be the recipient of this scholarship because it means so much to me that this group of women is able to support women in leadership within their organization and also extend their outreach to women like myself seeking to make a difference in this world,” said Determan. “This scholarship is helping me achieve my goals of becoming an electrical engineer, while also providing me much hope for the future of women in leadership. Meeting these women has helped me see that the future is so bright for any woman looking to advance in their career.”

As an active member of the Society of Women Engineers, where she is a peer mentor, Determan does a great job of giving back to her campus community. She founded a STEM sorority so like-minded women on campus can have their own community, has strived to make the campus a better place for students throughout her time at UT, especially women pursuing engineering degrees, and is currently serving as an ambassador for the college.

Despite all of that extracurricular activity, she currently has been able to maintain a 4.0 grade point average.

“Because of this scholarship and others similar to the Marcia Katz Scholarship, I have been able to thoroughly enjoy my time here at UT, and I will take many memories with me after this chapter of my life comes to an end,” she said. “Many of my favorite memories come from my sorority, Alpha Omega Epsilon, which my friends and I founded just under three years ago with a vision to provide a space in Greek life for women in STEM. The university of Tennessee has shaped me into the woman I am today, and I am forever grateful to be a Vol.”

Having accepted a position as a plant engineering with Eastman in Kingsport, Determan’s career goal is to use her degree to become an electrical engineer to create cleaner power and lower the cost of electricity. She has previously worked internships with Eastman Chemical Coal Gas Plant and Duke Energy, which will help ease her transition to her new employer after she graduates in May.

The award consists of a monetary award of $2,500 and is named in honor of E. Marcia Katz, the first woman to earn a doctorate in mechanical engineering from UT in 1975, who later became the first woman to serve on the faculty in the Department of Nuclear Engineering, accumulating several college and university-level honors in the process.

Katz worked for Tennessee Senator Jim Sasser and later served as a White House fellow, advising President Bill Clinton’s administration on science-related matters. She died in a car accident in 2006.