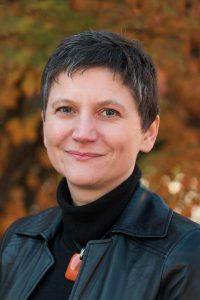 A research group at UT is helping to democratize access to data. Its collaboration is part of a national team of researchers that has been awarded $5.6M from the National Science Foundation (NSF) to build the critical technology needed to sew-up the national computational infrastructure and to draw talent from a diversity of Americans to the data-driven sciences.

Through a pilot project called the National Science Data Fabric (NSDF), led by the University of Utah’s Valerio Pascucci, the team will deploy the first infrastructure capable of bridging the gap between massive scientific data sources, the Internet2 network connectivity and an extensive range of high-performance computing facilities and commercial cloud resources around the nation.

Michela Taufer, the Dongarra Professor in UT’s Min H. Kao Department of Electrical Engineering and Computer Science, is assisting Pascucci with this mission, as are several co-principal investigators (PIs) together with SDSC Interim Director Frank Würthwein, Alex Szalay at Johns Hopkins University, and John Allison at University of Michigan at Ann Arbor. The team will partner with NSF-funded efforts such as Fabric and Open Science Grid (OSG), and industry partners such as IBM Cloud and Google Cloud, on the project.

According to Pascucci, the science and technology sector is on the cusp of tremendous discoveries and technological innovations that benefit society, and fast-paced progress requires a cyberinfrastructure enabling high-speed access to the data generated by large experimental facilities worldwide, which he notes is a key unmet challenge.

“The massive IceCube neutrino detector had to be built at the south pole, but its data is best processed at large US computing facilities. The XENONnT experiment, the world’s largest and most sensitive dark matter detector, has been built below the Gran Sasso mountain in Italy. Still, its data has to be quickly analyzed by scientists around the world.

“The Cornell High Energy Synchrotron Source (CHESS) routinely allows imaging the interior of new materials that scientists can test, analyze and perfect before turning them into technological innovations. These are just a few examples of advances in data-driven sciences that are in need for the NSDF,” said Pascucci, who also serves as the director of the Center for Extreme Data Management, Analysis and Visualization (CEDMAV).

According to Taufer, the NSDF can benefit society as a whole in critical fields from environmental, health and national security concerns, to renewable energy production, and, moreover, to understanding the evolution of galaxies and the nature of dark matter.

“By placing critically located data resources at minority-serving institutions and providing training and education for a diverse workforce, the NSDF pilot will enable diverse communities to participate in cutting-edge research,” said Taufer. “NSDF is partnering with the Minority Serving Cyberinfrastructure Consortium to implement a rich set of webinars, training modules, and other educational opportunities for underserved communities.”