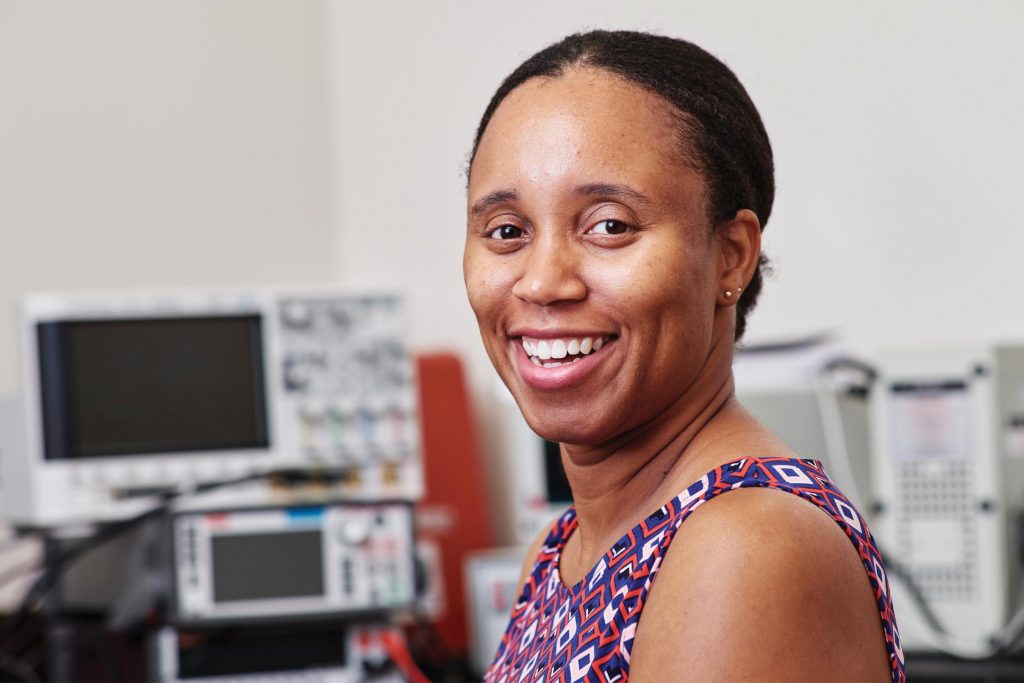 Assistant Professor Nicole McFarlane has been developing technology to aid in eliminating the need for diabetics to administer glucose tests.

Though a necessity, the tests are frequent, often inconvenient, and can be painful, making the ability to bypass them of significant importance to patients.

“We’ve taken a two-pronged approach,” McFarlane said, of her initial breakthrough. “We’ve aimed to build a better sensor that will require a smaller sample size, but also be able to reliably replace the sensors people currently use.”

That work was built on the use of biologically-based analyte sensors, which can be implanted inside a patient to allow for continuous, accurate monitoring when paired with a neuro transmitter, eliminating the tests and the chances that patients would forget to take them.

From the start, McFarlane said her goal was to use changing technology in a quest to develop “smarter” devices, perhaps even ones that could inject the needed doses of insulin and thereby cut out the need for injections.

Some of those steps are already taking shape.

The Department of Energy is very interested in the ability to use the sensors because they are smaller, faster, and more cost efficient than tubes. We use the same technology as the camera in your phone, which has the added benefit of not being magnetic.

“We have been improving the technical specs of our various sensors, incorporating analog signal processing and neuromorphic-based readout electronics for our single photon avalanche diode (SPAD)-based sensors and working on integrating a microprocessor with our other sensor front ends,” McFarlane said. “Incorporating neuromorphic electronics helps us even more closely mimic biological systems, and SPADs help us create a device for which a single photon can elicit a current response, a great improvement over previous devices.”

Each new development has its own place in the overall sensor, with the SPAD-based portion intended for applications such as neutron detection and the electrochemical sensors intended for glucose and other analytes.

McFarlane said that her team is currently working on integrating multiple sensors on the same chips, which will add more functionality to the sensors. For example, one sensor would be able to detect both temperature and impedance due to electrochemicals or pH balance.

SNS scientists study materials at the smallest scales, but the most common means of measurement—photomultiplier tubes—are expensive, require massive cooling efforts, and are inside a glass tube and thus, fragile.

“The Department of Energy is very interested in the ability to use the sensors because they are smaller, faster, and more cost efficient than tubes,” McFarlane said. “We use the same technology as the camera in your phone, which has the added benefit of not being magnetic.”

That last point is vital because experiments at SNS could have their outcomes tainted by outside magnetism. The DOE’s Office of Science was impressed enough with the idea that it recently awarded McFarlane and her team $600,000 to build out the concept for use at SNS, proving that, while the device itself is small, the impact it could have is huge.