A new scholarship being offered by the Min H. Kao Department of Electrical Engineering and Computer Science, the Dibyendu (Dipu) and Anindita (Ann) Mukherjee Endowed Scholarship, will help EECS students who are interested in data science, which comprises but is not limited to the fields of artificial intelligence, machine learning, and deep learning. 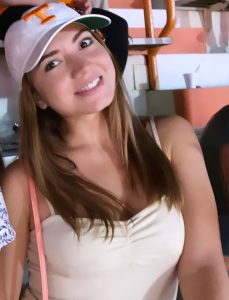 Dipu and Ann Mukherjee established the scholarship and recently got to chat with its first recipient, EECS senior and computer science major Maria Auxiliadora Hernandez Rivero, via a Zoom meeting.

Rivero, who is from Venezuela, is interested in machine learning and cybersecurity, and has overcome plenty of adversity just to be able to come to the United States and study at UT.

“This situation in Venezuela right now, what’s going on, politically and economically, it’s like it’s very chaotic,” Rivero said. “I was studying electronic engineering at Simon Bolivar University, which is a really good university in Venezuela. But combining my studies with the whole situation in Venezuela, the strikes, and many times we didn’t have water or power was really discouraging but I consider myself like a really persevering person, so that didn’t deter me from pursuing my goals.” 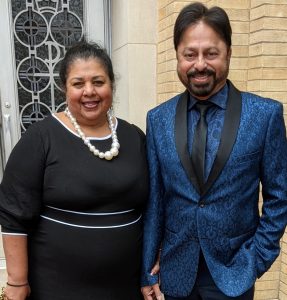 Dipu earned his master’s degree in civil engineering at UT in 1990 and is presently the chief innovation officer for VLMY&R Commerce in Dallas. Ann is chairman and CEO of North America at Pernod Ricard.

In a prior role, he served in a position that included Venezuela as part of his region, so Rivero’s story hit home.

“In my last job I used to manage Venezuela, so I know the situation there very deeply,” he said. “So, I know what you’re going through, I know firsthand and it’s just remarkable how you didn’t let any of that hold you back.”

By 2017, the situation in Venezuela had deteriorated enough that Rivero’s father wanted her to leave the country to continue her education, including her possibly facing arrest for her role as a community activist.

He sent her to Puerto Rico first, but then Hurricane Maria brought widespread destruction to the island, forcing her to continue on to Orlando.

“I understand the difficulties of a foreign student coming into this country,” Dipu Mukherjee said. “I was one of them like that when I started at UT. Just to buy a car, I had to do four jobs, so I understand any help, financially, really lets you focus on your dream, and you can be successful at it, so this scholarship was a way to help.”

Ann Mukherjee said she was happy to help Rivero, who she described as inspirational. She said that she was also very deeply connected to the situation in Venezuela, and was in awe of Rivero’s journey.

“You are incredibly passionate, courageous; you’re everything that I wish every woman in the world would be,” she said. “It’s remarkable how you didn’t let any of that hold you back. And how you persevered and you’re turning all that difficult pain into such incredible power.”

Rivero is currently a teaching assistant for EECS lecturer Camille Crumpton. She noted the inspiration she took from watching Rivero excel in classes like US History despite learning English as a second language as an adult.

“Maria is an excellent TA, and I feel lucky that I was the first faculty member to have her in class, because I know other ones will also love to have her as a TA in the future,” Crumpton said, “She is one of the hardest working students I’ve come across, one of those ‘once-in-a-decade’ students. And it’s not just with computer science, but everything she does. Her future is extremely bright, and any faculty member or future employer would be lucky to have her.”

As for her career plans, Rivero says, that she wants to immerse herself in machine learning and potentially cybersecurity, working in a related field after graduation before becoming her own boss.

“I want to start my own company,” said Rivero. “Also, at some point I would like to do something to help the Hispanic community, because I know the struggle that Latin American people and mostly Venezuelans have gone through.”

Giving back to help others, in true Volunteer fashion.