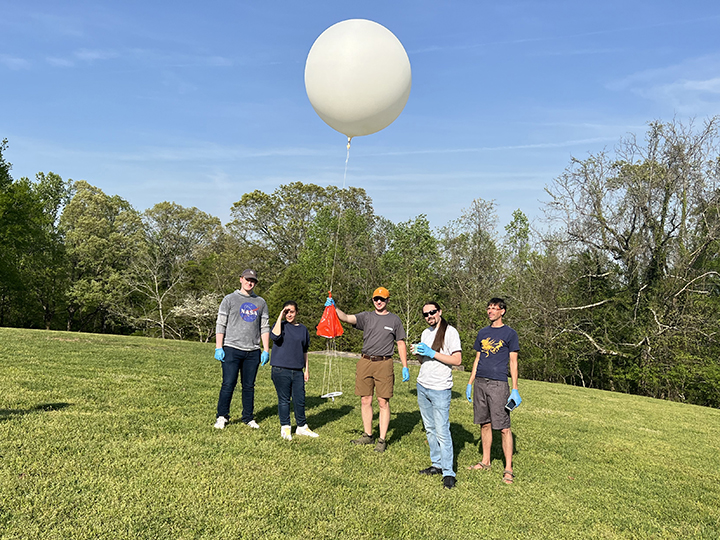 Members of the UT Amateur Radio Club launched a radio balloon mission on Saturday, April 23. The balloon carried a payload consisting of a lithium-battery-powered GPS, temperature sensors, and micro transmitter that broadcast the club’s call sign, height, position, and temperature. It also carried one of the club’s “QSL” cards, which are written confirmations of a two-way radio contact that are exchanged between amateur radio stations, in hopes that someone would find the payload and return it. 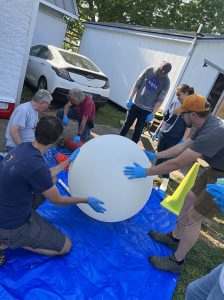 The payload’s creation was part of an electronics course taught by EECS UL Professor of Practice David Icove and was intended to familiarize the students with electronic construction and communications methods. It required handling and soldering many small components with tweezers and magnifying glasses.

The weight of the payload was just over one ounce for the electronics, and 3.9 ounces total when three “AA” batteries and a Styrofoam container were included. The club launched their balloon from Roane State Community College’s Tampe Allen Observatory near the town of Harriman, as it is at a higher elevation above sea level than the UT Knoxville campus.

The payload was lifted by a helium-filled weather balloon eight feet in diameter. A parachute was included to safely bring the payload back to Earth after the balloon popped. The launch took place around 5:30 p.m. in very clear skies and was visible to the unaided eye for more than thirty minutes. The GPS unit tracked the balloon’s drift, and the temperature sensor sent the ambient air temperature to the ground by radio telemetry using ham radio frequencies and the UT Amateur Radio Club’s callsign, AA4UT. The transmitter broadcast with an output power of 20 milli watts, which is about one percent of a cell phone’s transmission output power.

The club was able to record the balloon’s signal for over two hours as it reached a maximum altitude of about one hundred thousand feet before bursting over Johnson City. The lowest recorded temperature in flight was minus thirteen degrees Celsius. The club plans to launch another balloon soon with a more advanced payload. 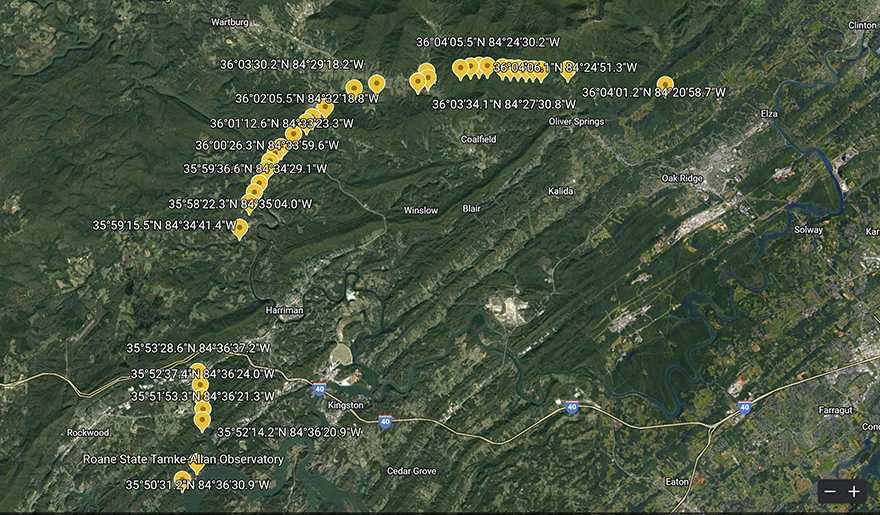 Google Maps image tracking the known, recorded locations of UTARC’s balloon as it flew across East Tennessee, west and northwest of Knoxville.

“It was an enjoyable experience, but the constant worry of the balloon popping, either due to touching the grass or ourselves, caused panic at times,” Davis said. “The GPS failed after it reached a certain altitude, likely as a safety measure, but I would still call it a success. The launch meant that college has been successful at teaching me what I needed to know for real world applications. To most people, sitting in front of a computer reading a data stream for a few hours would be extremely boring, but to us, it was the best part. Watching the data come in from the balloon miles away was worth all the trouble that came with the payload.”

Walker echoed Davis’ sentiments about the mission. “For me it felt like watching your child go out on their own for the first time, hoping that everything works out. After building everything by hand for the radio, watching it go off into the distance was both very scary and exciting at the same time.”