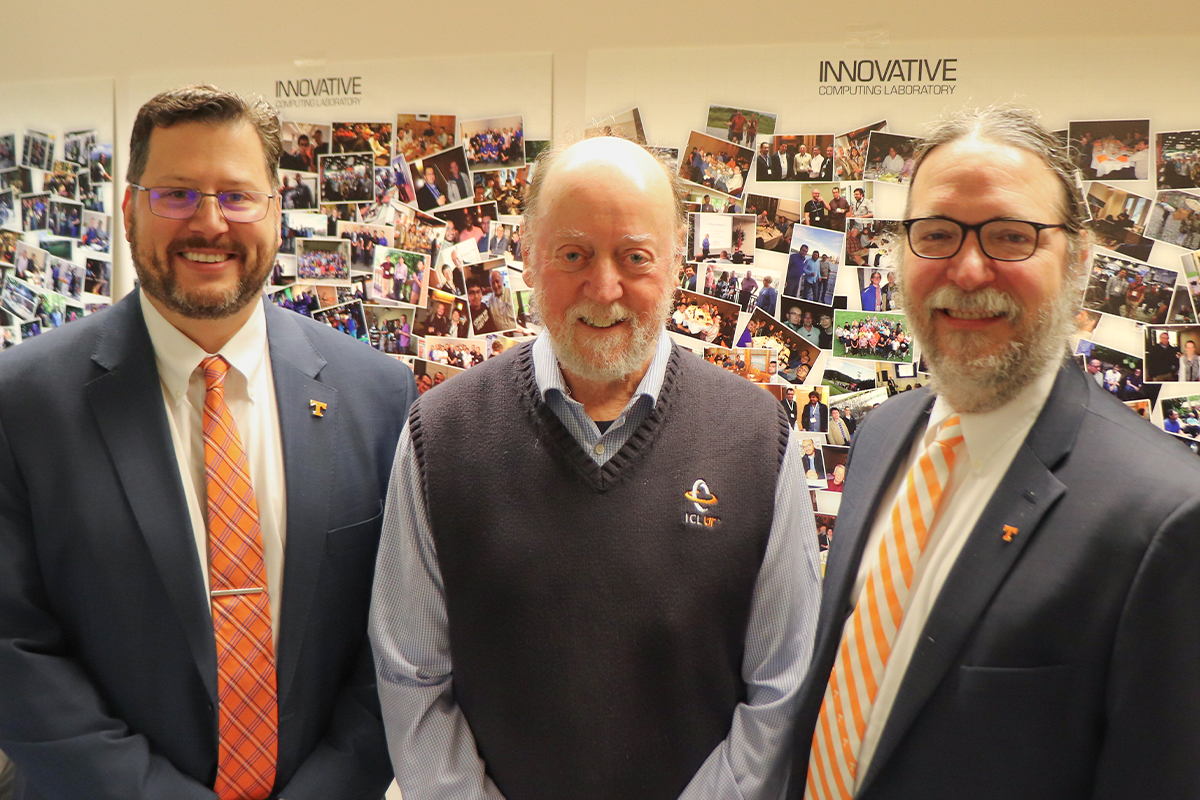 Earlier this month Jack Dongarra, Distinguished Professor of Computer Science in UT’s Tickle College of Engineering and Distinguished Research Staff Member at Oak Ridge National Laboratory, made headlines around the world after receiving the 2021 Turing Award from the Association for Computing Machinery. This prestigious award, known as the Nobel Prize of computing, is the highest distinction in computer science. Along with global recognition for contributions of lasting and major technical importance to the field, the award includes a $1 million prize funded by Google.

Distinctions such as the Turing Award are not only based on comparison to a scientist’s peers, but also require innovation—doing something that has never been done before, and making an impact so great that it, in essence, changes the game. Past recipients of the Turing Award include World Wide Web founder Tim Berners-Lee and Douglas Engelbart, inventor of the computer mouse. 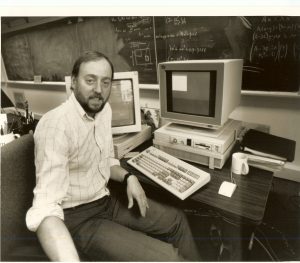 1990, Dongarra at University of Tennessee, with an IBM PC and Sun Microsystems Workstation (Association for Computing Machinery)

Arriving on campus in 1989, Dongarra founded the Innovative Computing Laboratory in what is now the Min H. Kao Department of Electrical Engineering and Computer Science. Through the ICL, he became, as an Axios story describes him, a pioneer in the field of supercomputers, developing computing-related software systems and open-source libraries—all of which helped bring about the supercomputing era, establishing the foundation for future generations of machines.

Dongarra developed software packages that became the industry standard and allowed high-performance computers to become increasingly more powerful. The Axios article explains, “The arrival of supercomputing—machines that put massive numbers of processors working in parallel to tackle complex scientific problems—has paved the way for everything from the sequencing of genomes to modeling weather patterns to simulating nuclear war.”

The most famous computer code Dongarra helped write is called Linpack (short for linear algebra package) and it enables complex mathematics calculations to be run on a supercomputer. Using Linpack, Dongarra and his collaborators created a way to test and measure the power of a supercomputer by focusing on how many calculations it could run in a second. This test has become the primary means of comparing the fastest machines on earth and has made it possible to form competitive global rankings of computing capabilities such as the Top500 list of supercomputers. 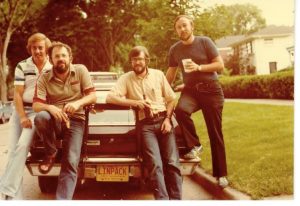 1979, Dongarra’s car with the LINPACK license plate and the authors of the LINPACK software package, suburbs of Chicago near Argonne National Lab. Dongarra is far left. (Association for Computing Machinery)

In a profile of Dongarra’s work, the New York Times provides a bit of history and explains the relevance of testing supercomputers: “By the early 1990s, scientists could not agree on the best ways of measuring the progress of supercomputers. So Dr. Dongarra and his colleagues created the Linpack benchmark and began publishing a list of the world’s 500 most powerful machines. Updated and released twice each year, the Top500 list . . . led to a competition among scientific labs to see who could build the fastest machine. What began as a battle for bragging rights developed an added edge as labs in Japan and China challenged the traditional strongholds in the United States.”

On receiving this prestigious award, Dongarra told ZDNet “I’m really honored. It’s hard to believe that this has happened. I have tremendous respect [for past Turing winners]. I have used their books, I have used their theorems, and they are really the stars and pillars of our community. I only hope I can be a role model for future computer scientists.” ZDNet notes, “His Turing peers have probably all used Dongarra’s programs and libraries at one time or another, perhaps on a daily basis.” 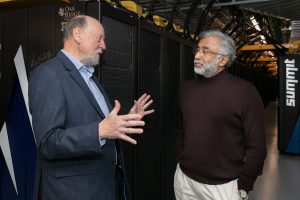 Dongarra, who holds a joint appointment at Oak Ridge National Lab and the University of Manchester, plans to shift to emeritus status at UT later this year, but will continue to work with doctoral students.

As reported by Protocol, Dongarra and his group at UT, “are busy contributing to the software and applications needed to operate three exascale supercomputers that the Department of Energy is having built to enable scientific research for things like wind energy, nuclear physics and weapons security, earthquake studies, cancer cures and more.”

What is an exascale computer? As Dongarra explained to Axios, “To get a sense for the power of the latest exascale supercomputers, try to imagine everyone on earth doing one calculation per second. It would take us all four years to do what an exascale computer can do in a single second.”

In other words, an exascale computer is a pretty big deal in the world of computer science. 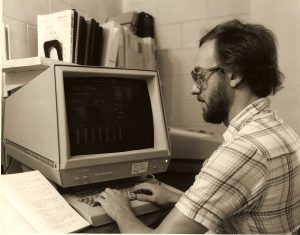 1980, Dongarra at Argonne National Lab with a Tektronix 4081 Workstation (Association for Computing Machinery)

1980, Argonne National Laboratory, the group is the members of the Applied Mathematics Division. Dongarra is seated on the far left. (Association for Computing Machinery) 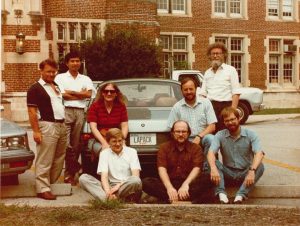 The group that created the software package LAPACK at the University of Tennessee in front of Dongarra’s car with the LAPACK license plate, circa 1989. Dongarra is seated center-right. (Association for Computing Machinery) 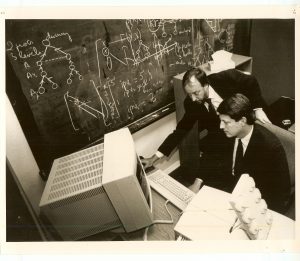 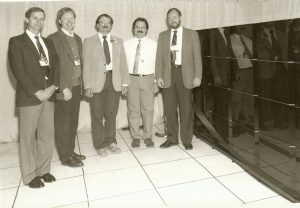 1995, Oak Ridge National Lab, Intel Paragon XP/S 150 MP supercomputer with 3,072 processors, number 3 on the Top500 list in 1995. Dongarra is the last in line standing on the far right. (Association for Computing Machinery) 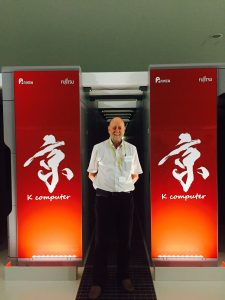 2012 Dongarra with the Japanese K-computer in Kobe Japan in 2016, it was the #1 computer at that time. (Association for Computing Machinery) 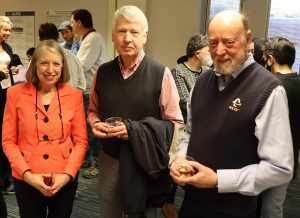 (Left to right) Sue Dongarra (Jack’s wife), former associate director of the Innovative Computing Laboratory Terry Moore, and Dongarra during the celebration at UT. (The University of Tennessee) 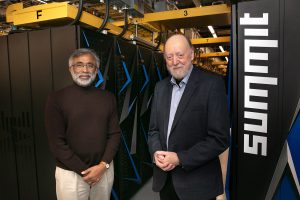