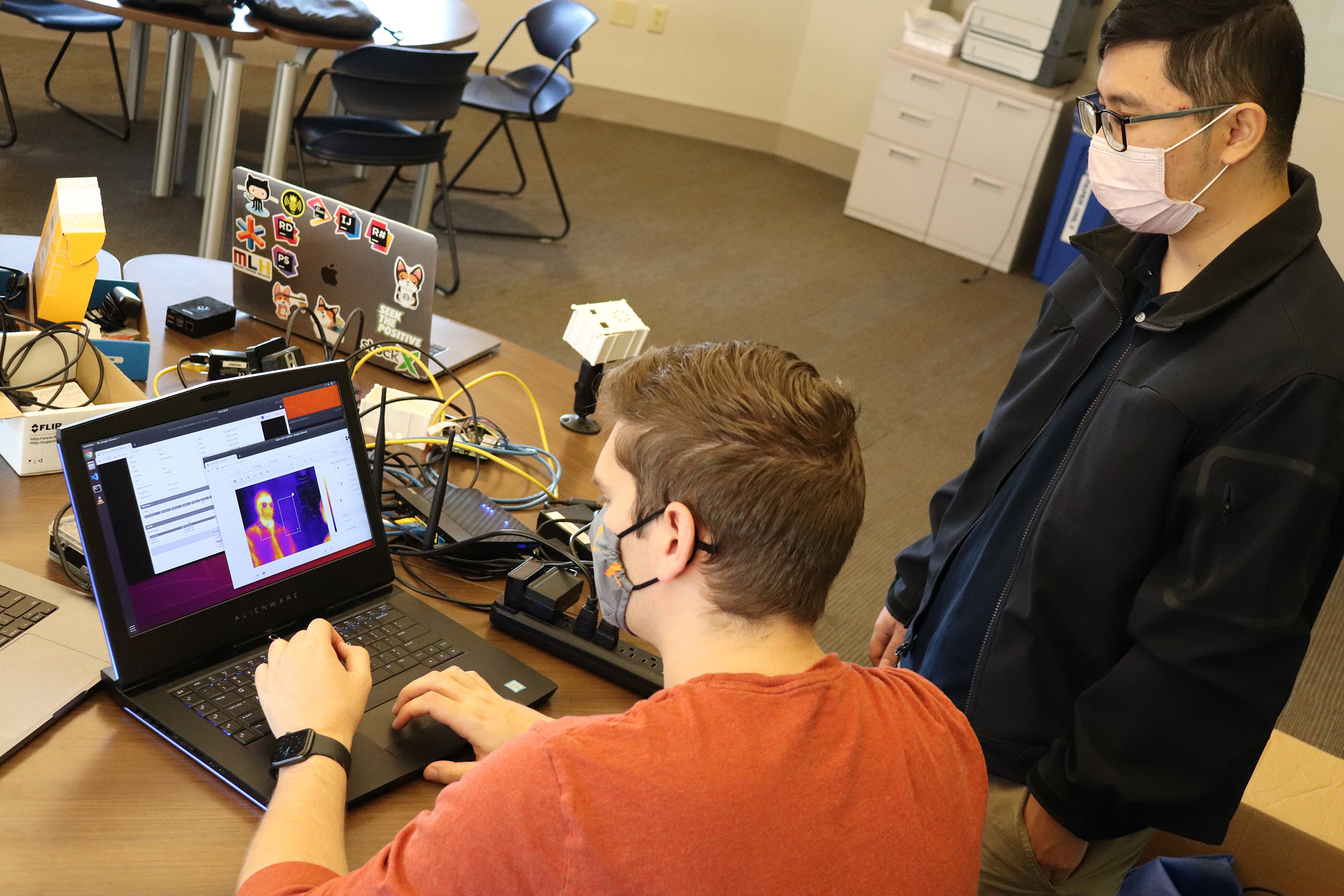 EECS students Landon Harris, left, and Tan Nguyen work on the current version of the infrared system. Along with Jan Jakowski and Justin Adamson, they have continued the project to its next phase. Photo by Randall Brown

The term “Vision System” may refer to machine vision, a computer-based system where software performs tasks assimilable to “seeing”, usually aimed to industrial quality assurance, part selection, defect detection, etc. Machine-based vision systems serve a variety of functions, from trail cams used by outdoor enthusiasts that begin recording when motion is detected, to automatic doors that open when someone approaches.

In recent years, such systems have shown promise in areas related to safety and security, such as fire detection and hazardous cargo control.

While those systems hold promise, they are only as good as their “vision” allows them to be. Which is where a team of students from the Tickle College of Engineering came into play.

Taking on a project proposed by the Electric Power Research Institute (EPRI) and coached by principal investigator Fred Martin of the Min H. Kao Department of Electrical Engineering and Computer Science (EECS), the students set out to develop a thermal visioning system that required less maintenance and cost less to implement, yet was reliable and refined enough to safely serve specific roles that had little-to-no margin for error.

The system specified by EPRI required at least 50 active fields per screen corresponding to a field of view of the IR camera aimed at a machine or process with corresponding numbers of features whose temperature needed to be monitored for overtemperature. Each feature or active field was required to have unique temperature thresholds for alarming and notification, such as with a shaft bearing housing of a machine, for example.

Beyond just making sure the visioning system worked, the students had to also develop it in such a way where an action was triggered if it “saw” conditions fall out of a preferred range, such as sounding an alarm if temperatures got too high.

Additionally, the idea and hope for the system is that it needs to be able to communicate in a real-time fashion to a central hub, allowing for several systems to be monitored at once and alerting whoever is monitoring the entire network to specific problem areas as the need arises and conditions warrant.

Each week, the team rotated members to serve as liaisons with EPRI, sharing the latest data and outcomes with them. EPRI’s Simon Boka served as their contact on the project, solidifying UT’s connections to the project, as he graduated from EECS in 2018.

“We had the opportunity to discuss specifications directly with the client, present on our achievements and results, and even submit a detailed final report that outlined our methods and results,” said Seuss. “There were a lot of times when things did not work out the way we expected, or took much, much longer than we anticipated. Accounting for these setbacks and learning to prepare for worst case scenarios is a very valuable set of skills that our team can now bring to future projects.”

Jones also spoke highly of the experience, and was quick to praise Martin’s leadership as being a key to the group’s success.

“Long term, I believe these experiences will prepare me for real-world engineering problems better than any class,” he said. “I think the most critical lesson I learned through this project is that your task probably won’t go according to plan, and learning to roll with the punches while working the problem is quintessential in the collaborative environment.”

Their success is even more impressive considering that the computing- and electronics-based nature of the project was completed by students who were taking an EECS class for non-EECS majors, meaning they brought a mix of outside disciplines to bear on the project.

“I think that the team deserves a lot of credit for their hard work and success,” said Martin. “Normally, the team would have come from a senior design project within the department, but they worked really well together and made enough strives that the next iteration of the project is ongoing, in conjunction with EPRI. I am very proud of the team and their work for EPRI and the Tickle College of Engineering.”

The project working with EPRI has now transitioned to a senior design team consisting of Landon Harris, Tan Nguyen, Jan Jakowski, and Justin Adamson, all of computer science.

EPRI’s origins date back more than 50 years, when it was founded in the wake of a major blackout to bring together various aspects of electrical and power grid-related research and innovation.

Locally, EPRI has had various partnerships with UT since 2009, impacting more than 200 students and accounting for more than $300,000 in sponsorships.