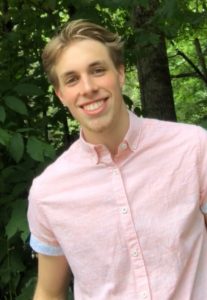 A high school valedictorian from Knoxville has earned a scholarship from Oak Ridge Associated Universities (ORAU) and will be coming to Rocky Top to study computer science.

Cody Blankenship, a 2020 graduate of Apostolic Christian School, was awarded one of ORAU’s five William G. Pollard Scholarships of $2,500 toward undergraduate studies for the 2020-2021 academic year. He will pursue a degree in computer science in our Min H. Kao Department of Electrical Engineering and Computer Science.

Blankenship earned a 4.19 GPA in high school, was selected as valedictorian, and completed 12 hours of dual-enrollment courses to graduate with distinction. He helped to found and lead his school’s STEM Club, which set up a computer lab and completed a physical computing curriculum on Raspberry Pi computers. He was captain of the varsity soccer and basketball teams, and won a gold medal in cross-country at the 2019 National Apostolic Christian School Competition.

The William G. Pollard Scholarship Awards are presented in honor of ORAU’s founder in recognition of his dedication to science and education. A UT physics professor, Pollard founded the Oak Ridge Institute of Nuclear Studies—which later became ORAU—to link the valuable scientific resources developed in Oak Ridge as part of the Manhattan Project with regional universities.

Other recipients of this year’s Pollard scholarships are Jamie Batson, Olivia Hudson, Audra Jean “AJ” Jones, and Savannah Jones. Each year, ORAU awards these scholarships to employees’ children or stepchildren who display exceptional achievements in their high school or undergraduate studies. Applicants must submit official transcripts from all high schools and colleges attended, three references (at least two of which must be from teachers), and a 500-word essay describing professional and personal interests.

Read more and see the other scholarship winners.