For decades, many scientists and engineers have dreamed of and worked toward the realization of computers that think, even robots that can move and interact with the world, all on their own. There is no doubt that artificial intelligence captures the imagination, but many aspects of brain-inspired computing have been primarily the subject of science fiction.

For instance, real-time learning, adaptability in an unpredictable environment, and reactive control remain as challenges for brain-inspired computers. At the same time, machine learning has shown a great deal of success in feature classification and related applications. 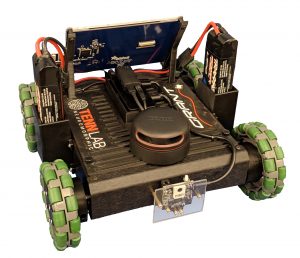 “Robot-control systems are a great example application of the architectures explored by our TENNLab team,” said Rose. “In recent years, our team has demonstrated several small robots controlled by neuromorphic systems, which are brain-inspired computer designs that reside entirely on the robot itself, a big step toward autonomy.”

Such systems require little power to operate relative to their large machine learning counterparts and can perform tasks such as object avoidance without guidance from humans.

GRANT is controlled using a recent iteration of a computer architecture dubbed the Dynamic Adaptive Neural Network Array (DANNA), pioneered by Professor Emeritus Mark Dean. DANNA is an example of what Rose and his students now refer to as a reconfigurable neuromorphic array (RNA)-based system.

“Being reconfigurable means that it allows for the implementation of any neuromorphic application in the form of a spiking neural network that can be mapped to the resulting hardware,” said Rose. “Further, RNA style systems are adaptable in that they are built with hardware that enables the neural network to learn on-the-fly, adapting to and learning from real-world stimuli in real-time.”

Spiking neural networks are a key element in the team’s work, because they are designed in such a way that neurons only activate when certain criteria are met, in much the same way that neuron’s in a person’s brain activate for specific tasks, thoughts, or reactions.

The TENNLab team has received funding from the Air Force Research Laboratory (AFRL) and other agencies to explore the important role of nanoelectronics in the realization of brain-inspired or neuromorphic computer architectures. This work has led to an experimental RNA-style architecture known as Memristive DANNA (mrDANNA), which leverages nanoelectronic devices known as memristors in the realization of dense artificial synapses.

Memristors are resistors that “remember” and are known for their ability to change resistance with use, literally adapting or learning in a way similar to what has been observed for biological synapses. Being nanoscale devices, they are key to providing significant device density and low power operation, critical components for neuromorphic computing.

The many performance benefits of memristor-based neuromorphic systems have been demonstrated by many research groups, TENNLab included, through detailed modeling and simulation. Working with collaborators from the SUNY Polytechnic Institute in Albany, New York, Rose and his group have also been able to move beyond simulation and fabricate working mrDANNA integrated circuits that the team continues to test in the laboratory.

Through this work, the TENNLab team is moving ever closer to nanoelectronic enabled neuromorphic computers that could one day “think” all on their own.