Advancements in computing occur at a breakneck pace, with systems that once held the spot as world’s fastest falling down the list just a few years later.

A major goal in the field of supercomputing is achieving exascale computing, which means a level of performance where the machine is conducting one quintillion operations per second.

Japan’s Fugaku system recently ranked first in the world’s annual Top500 list of fastest computers with a speed of 415.5 petaflops per second, almost three times faster than Oak Ridge National Laboratory’s (ORNL) Summit, which was knocked from the top spot. Despite its speed, Fugaku is still not even halfway toward exascale.

One of the ways computer scientists hope to achieve such speeds is through the use of computational libraries, which group and share critical aspects of high-performance computing, allowing for ever-increasing processing speeds. 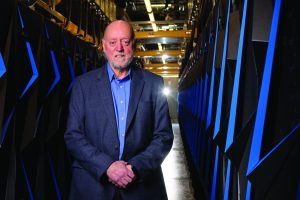 Distinguished Professor Jack Dongarra with the Summit Supercomputer at ORNL

“Developing powerful new libraries will enable us to push back against current boundaries by the way we utilize and share the most optimal algorithms,” said Distinguished Professor Jack Dongarra, director of the Innovative Computing Laboratory in the Min H. Kao Department of Electrical Engineering and Computer Science. “Like a lot of things related to computing, it’s an ongoing process that builds upon itself, improving as we go.”

Dongarra, who is also Distinguished Staff at ORNL and a Turing Fellow at the University of Manchester in England, is a key player in those efforts through his leadership of a major research thrust aimed at tackling the issue, known as Computational Libraries Optimized Via Exascale Research, or CLOVER.

CLOVER relates to several areas identified as mission critical by DoE, ranging from national, economic, and energy security to health care, science, and Earth itself.

For its part, Dongarra’s group recently received additional funding of $14.7 million and will likely receive a total of $26 million during the project’s lifespan from 2016 through 2023.

“It’s a big project, with many implications,” said Dongarra. “We’re about halfway through the project, and we expect that the hardware side will probably be around $1.8 billion by the time we’re done, with the applications and software side, which is what we are working on here, also drawing about another $1.8 billion.”

Dongarra said that about 800 people are working on the project, with 23 groups working on applications and software alone, adding that he’s helping coordinate some of those efforts. The team has certain milestones that have to be met, so they are driven more by those than the overall final product.

“From our standpoint, we can just focus on providing the best software that we can,” Dongarra said. “Having said that, all the groups are in constant contact to make sure we’re all on the same page and that we meet the needs of those developing the applications.”

And helping the country solve its own critical needs in the process.

Sponsored by the US Department of Energy, CLOVER is bringing to bear the following four current projects, each with their own approaches and goals, and merging them into a larger effort: