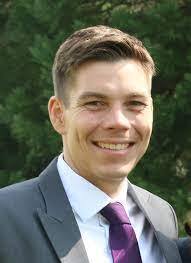 Since its founding in 1989, the Innovative Computing Laboratory (ICL) has helped push several boundaries related to high performance computing and opened up avenues of research that once wouldn’t have been possible to conceive.

That commitment remains as strong as ever as the lab transitions from one leader to another, with Hartwig Anzt coming in as the new director.

“ICL has always been the place where algorithms and software are developed that are used around the world—this will not change,” said Anzt

Anzt is very familiar with the ICL, having served as a postdoctoral researcher, research scientist, and consultant since coming to the lab in June 2013. Distinguished Professor Jack Dongarra—who founded the ICL and has been its sole director—officially retired at the end of June, necessitating the move.

As part of the selection, Anzt will also be the recipient of the MathWorks Professorship in Scientific Computing, which was announced in the fall of 2021 following an endowment from the company. Along with earlier contributions from the company, MathWorks has now provided $1 million.

MathWorks founder Cleve Moler was on a team with Dongarra at Argonne National Laboratory in the 1970s. Then the two later teamed up to work on various linear algebra libraries before Moler served as faculty advisor during Dongarra’s doctoral work at the University of New Mexico.

Moler got the idea for what became MATLAB shortly after that, which would go on to be the idea that started MathWorks.

In fact, much of the world of modern computing can trace at least part of its lineage to the lab, thanks to its prominent role in the development of numerical linear algebra libraries, evaluating and benchmarking the performance of machines, and helping in the expansion of distributed computing.

Together, their impact can be felt across various tech-centric products, from laptops to cell phones. Part of the reason for its influence across the tech sector is that even its more high-profile projects are made available for free, including Gingko, a popular numerical linear algebra platform that Anzt served a leading role in developing.

“Software needs to be considered critical research infrastructure, similar to a beamline or a telescope,” said Anzt. Software enables science.”

The lab has also served as a connection point for UT to partner with high-profile laboratories, including the national labs such as Oak Ridge, Argonne, Los Alamos, Berkeley, Sandia, and Lawrence Livermore, and premier universities like Stanford, UC Berkeley, and Georgia Tech, and key industry leaders including IBM, Dell, and NVIDIA.

He is a member of the Institute of Electrical and Electronics Engineers Society, the Society of Industrial and Applied Mathematics, and the Association for Computing Machinery’s Special Interest Group on High Performance Computing in the Regional Group of Middle Tennessee.