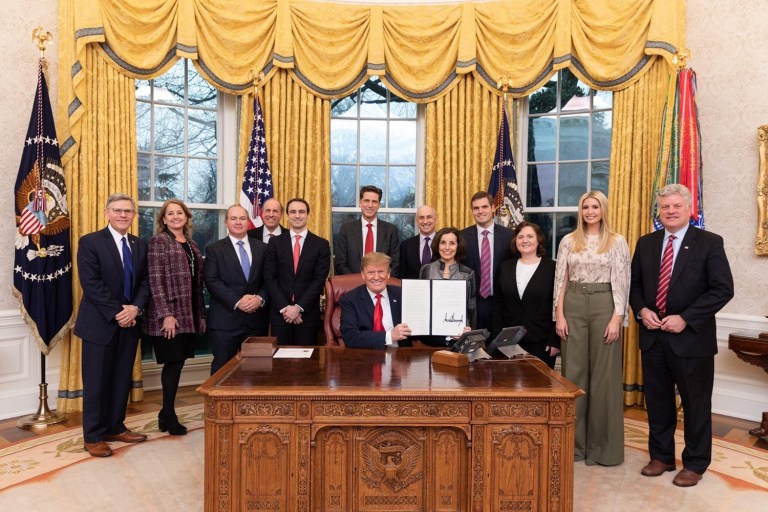 Signing ceremony of the Executive Order on “Maintaining American Leadership in AI” on Monday, February 11.

The White House directive includes five areas of emphasis to strengthen US leadership in AI, noting that, while the US was an early leader in the development of AI and machine learning, other countries also are moving forward.

Since her appointment as assistant director for artificial intelligence at the White House Office of Science and Technology Policy in August, Parker has helped lead the initiative, which has been months in the making.

“This executive order to establish the American AI Initiative comes at a watershed moment in the AI community,” Parker said. “My priority since joining the White House Office of Science and Technology Policy has been to help solidify our nation’s strength in AI research and application. AI impacts everything from health care to energy to safety and defense, so an investment in AI is an investment in securing our future.”

Parker’s appointment with the OSTP is the second national leadership role she has held; she previously served as a division director for the National Science Foundation.

“Dr. Parker’s role in helping craft a national initiative on artificial intelligence is a credit to her research expertise, her forward-thinking abilities, and her leadership in this field,” said Interim Chancellor Wayne T. Davis. “We are proud to have her both as a professor and an alumna.”

While working with the White House, Parker maintains her professorship in the Min H. Kao Department of Electrical Engineering and Computer Science in UT’s Tickle College of Engineering through the Intergovernmental Personnel Act.